Recalibration is, simply put, ‘a subsequent correction or adjustment’. It’s a common procedure in our daily lives, as we make minor fixes to readjust things from computer displays to television signals. 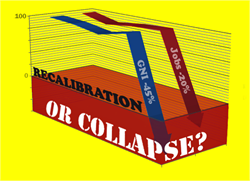 But when PEMANDU ‘recalibrated’ the Entry Point Projects (EPPs) that make up the ETP, the changes were far from minor. Somewhere during the process, RM107.7 billion of

Gross National Income (GNI) and 75,000 jobs were written off – 45% and 20% of the respective original forecasts respectively!

Where was the GNI lost? What type of jobs disappeared? Such massive reductions demand clarification; they must not be casually dismissed as ‘recalibrations’.

In the absence of adequate explanations from PEMANDU with regards to these unexpected changes, REFSA analysts Ong Kian Ming and Teh Chi-Chang conjecture several possible reasons, including extremely exaggerated forecasts by certain EPPs to the point that the original GNI contribution forecast was double the level now considered realistic. The massive scale of such embellishment borders on fraud that the ETP labs and PEMANDU’s highly-qualified staff and expensive consultants failed to detect.

Were these projects then selected as EPPs instead of others which presented lower, but more realistic projections? REFSA tackles the the ‘recalibration’ head-on in